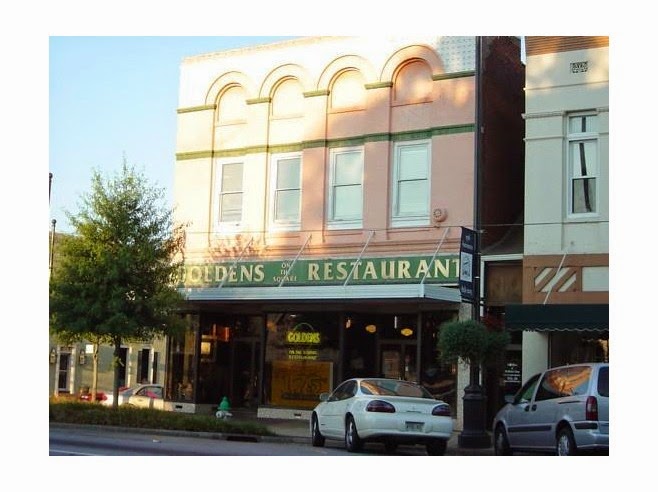 Day 1
I had business to attend to for my day job in Newnan, Georgia a few weeks ago and since I am a perpetual foodie and always looking to try out the best of local fare I asked the attorney I was going to see where I might find the best local Southern cooking.
He directed me to just down the street to Golden’s on the Square.
Immediately upon walking in I was reminded of a places like Morrison’s and Piccadilly, but clearly not corporate run. The daily options are laid out buffet style and the options are many. The lady behind the counter doing the dipping and ladling onto my plate was friendly enough, but not overly so, which is fine by me. I decided to go with the country-fried steak, fried okra, creamed potatoes and Lima beans. I paid for my food, got myself a glass of sweet tea and sat down.
I immediately dove into the country-fried steak, which was covered in brown gravy and I was immediately satisfied as it was not overloaded with salt and tasted like it was indeed homemade. The cream potatoes, with gravy, and the Limas were equally as delicious as the country-fried steak, but the fried okra… I’m pretty sure this fried okra was not frozen or pre-made, but the batter was infused with some sort of spice akin to seasoned salt and I was not a fan. I also was not a fan of the fact that it seemed as if someone had spilled half a container of salt into the okra. The okra itself was well-cooked and the seeds weren’t hard like I find in a lot of fried okra that is frozen, but the amount of salt that had been added, whether intentional or not I’ll never know, kept me from finishing my plate.
_______________________________________________________________
Day 2
On the following Monday I again had to go to Newnan to see the same attorney. Aside from the okra I was pleased with my previous visit and decided to go to Golden’s once again for lunch. I went through the routine again. I believe the same woman fixed my plate. This time I opted for the fried chicken, macaroni & cheese, fried green tomatoes and turnip greens. I again got my sweet tea and sat down. Their sweet tea is OK; not strong enough, a little watery and pretty darn sweet. But, I’ve had worse.
My choices on this day were even less healthy than my previous visit, but I wasn’t overly concerned. This was somewhat of a special occasion as I’m rarely in Newnan and good Southern cooking in Atlanta, where I live, is few and far between and often more expensive than it ought to be.
The fried chicken was superb. Juicy, cooked right and the portion was more than enough. The mac’n cheese was good as well, the sauce, if I may call it that, was a little thin and not as creamy as one might prefer, but  for the price it was fine by me. The turnip greens were also quite tasty. Far as I could tell they weren’t out of a can and when I added pepper sauce to them they brought me back to the days at my Meemaw’s and Granny’s and their turnip greens that came fresh from the garden. And now, last but not least, the fried green tomatoes – these, although quite greasy and I patted them down with a napkin were especially delicious. They were seasoned just right and were pretty soggy, just the way I like them. Unlike many fried green tomatoes you might get in chain restaurants like Folk’s, these fried green tomatoes needed no ranch or dipping sauce whatsoever. They had just the right amount of tartness and tangy and to add anything else would simply take away from them. On this particular day, I did finished my entire plate. I left satisfied and made my way back to Atlanta. If you’re ever in Newnan and are hungry for Southern food that is consistent and not done up like Paula Deen might do it – Go to Golden’s on the Square.
– Britt Thomas, staff writer